Biomechanics in the Operating Room 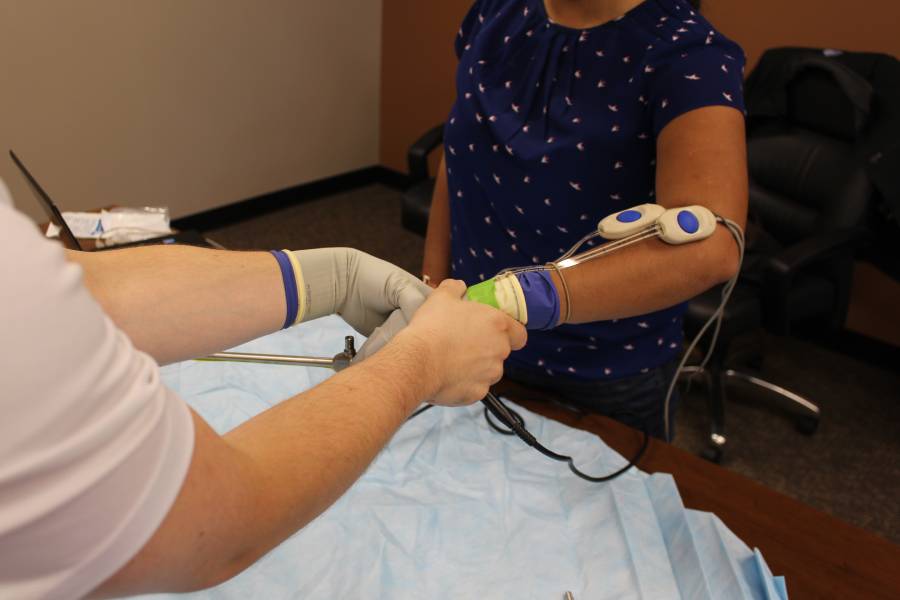 After performing laparoscopic surgery, a 30-year-old nurse claimed that his hand extensor tendon ruptured while he was holding an endoscopic camera during the surgery. The injury was allegedly caused by a forceful grasp from a surgeon over 60 years old who suffered from carpal tunnel syndrome. The nurse was involved in a vehicle collision one week prior to the surgery, during which the air bags were deployed.

The plaintiff's mechanical engineering expert involved in the case opined the injury occurred from a localized force through a soft fiber optic cable passing through the dorsal side of the nurse's hand. The plaintiff's medical expert (hand surgeon) opined that the fiber optic cable had nothing to do with how the extensor tendon ruptured, but that the injury mechanism is possible, and compared it to a rugger jersey finger injury during flag football and to a bicep rupture during flexion.

Given the opposing expert claim of a localized force through the soft fiber optic cable, our team of experts conducted a detailed analysis and experimentation with the subject tool and fiber optic cable to determine the plausibility of the injury through the claimed mechanism. Among the tools used during the inspection and analysis were motion capture technology and photo matching techniques to evaluate the upper body postures, force transducer, and tactile pressure sensors. Additionally, our experts performed an extensive literature review to understand all the factors that need to be considered when evaluating hand force exertions and the mechanism of injury for an extensor tendon.

Explico determined that biomechanical mechanisms of injury for an extensor tendon rupture involves acute traumatic events or chronic injuries. Through our analysis, our experts demonstrated that many factors affect grip strength and pulling/pushing forces, that grasping forces are not localized in only one zone, and that hand movement in this scenario can only be achieved if the reaction forces in extension exceed the external forces forcing flexion. Dr. Rosemarie Figueroa Jacinto testified in state court, and the jury agreed with Dr. Figueroa's testimony, and the claim was dismissed.

Read More →
Biomechanical Analysis of Head and Neck Injury Risk from a Falling Object
A woman was shopping at a convenience store when an empty plastic storage bin fell from the top shelf and allegedly struck her on the head.
Read More →
Closed Head Injury Assessment During a Tractor-Trailer Sideswipe Collision
The Plaintiff had slowed her vehicle considerably on a highway during a snowstorm with the intention of turning left.
Read More →
Visibility During a Bicyclist and Vehicle Collision
On a sunny afternoon, a child was bicycling on a sidewalk after leaving a nearby park.
Read More →
Occupant Forces During a Sideswipe with a Tractor-Trailer
A tractor-trailer changed lanes into a merging passenger vehicle resulting in a sideswipe type of collision.
Read More →
Comparing Forces on an Occupant From Different Motor Vehicle Collisions
An individual was involved in a relatively high-speed frontal collision two years prior to being rear-ended in a relatively low-speed collis
Read More →
Virtual Reality (VR) in the Courtroom
An individual over the age of 70 was walking through the interior of a 50-foot yacht for the first time.
Read More →
Determining the Driver in a Roll-Over Incident
A vehicle containing multiple extremely intoxicated individuals “t-boned” another vehicle resulting in multiple deaths.
Read More →
Seat Belt Misuse
The driver of a vehicle claimed that he was wearing his seat belt at the time of a collision.
Read More →
Camera Matching, Evidence Placement, and Court Testimony
An allegation was made that an automated sliding door caused an individual to fall.
Read More →
Injury Causation Analysis of a Low-Speed Rear-End Collision
The plaintiff was driving her vehicle and stopped at a stop sign with the intention of turning right.
Read More →
Determining Out-of-Position Occupant Kinematics Using 3D Scan Data and MADYMO
A woman was involved in a low-speed, rear-end collision while waiting to turn right onto a roadway.
Read More →
Trip-and-Fall Through Automatic Sliding Glass Doors
A woman fell when entering a department store, and the automatic sliding doors at the entrance closed on her.
Read More →
Garbage Truck Collision at Intersection with Unrelated ECM Data
A pickup truck was traveling at a cross street intersection and had the right-of-way when it was impacted by a garbage truck.
Read More →
Line-of-Sight for a Pedestrian and Bicyclist
Bicyclists passing a parked SUV on a residential street struck an eleven-year-old pedestrian as she was crossing the street.
Read More →
Evaluating Vibration Exposure and Lumbar Disc Injuries
A man who had been working for the railroad since 1970 claimed that he was exposed to years of repetitive, vibratory, stressful duties.
Read More →
Evaluating a Workplace Injury Using Camera Matching
A series of locomotives was stopped on a bridge traveling through a creek bed where a man had claimed to have fallen.
View AllView Less
back to case studies
Find the ideal expert today.