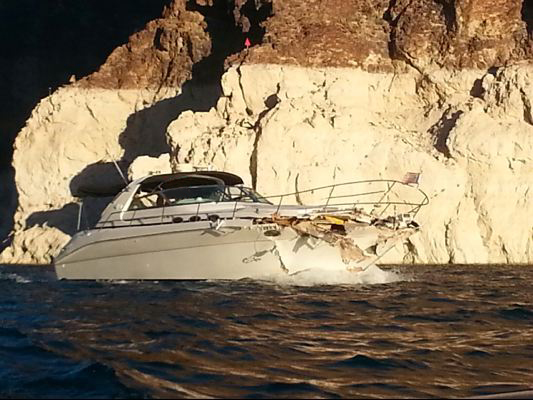 A recreational vessel with 6 occupants onboard allided with a rock canyon wall on Lake Mead, resulting in multiple injuries and one fatality. The operator claimed that the vessel was headed for the canyon wall and he was unable to steer away from the wall because the steering wheel was locked or stuck, and that the steering wheel was jerked out of his hands, allegedly by the vessel’s autopilot system. The steering system, and specifically the autopilot system, had allegedly been recently maintained by a marine mechanic.

Explico was hired to investigate the incident, and specifically evaluate the vessel’s steering system. Inspection of the subject vessel revealed that the autopilot pump was, at the time of the accident, completely disconnected from the steering system hydraulicly but still connected to electrical power.

The lab testing not only showed that all components were in working order, but also that even when the autopilot system was connected and attempting to turn the boat, the operator could easily overpower the autopilot pump by continuously turning the steering wheel in the desired direction of travel.

Hydraulic fluid from the steering system was collected at various locations in the steering system during removal. Lab examination of the subject hydraulic fluid came back with a significant number of large particulates which could cause valves in the hydraulic system to intermittently stick or lock. This intermittent locking was consistent with the witness testimony that attempts to steer away from the canyon wall in one direction failed because the wheel simply would not turn in that direction.

A thorough analysis of the subject vessel as well as a comprehensive evaluation of the hydraulic steering system showed that:

1)   There were no defects within any of the hydraulic steering components.

2)   The testimony that the steering wheel was locked when the operator tried to steer away from the collision was shown to be scientifically valid.

3)   Claims that the wheel jerked out of the operator’s hands or that the autopilot somehow contributed to the collision were not scientifically plausible.

4)   The operator could have avoided the allision by slowing down or stopping.

5)   The hydraulic fluid was shown to have significant presence of particulates, which may affect the performance of the steering system.

Explico was able to dissect the system and break it down into simple yet effective diagrams and figures to explain exactly how the steering system on the subject vessel worked and why certain claims were invalid based on features inherent in the subject system.

Read More →
Guard Rail / Propeller Strike Product Liability Case Study
A passenger aboard a pontoon boat fell off the front of the vessel and was struck by the propeller, causing a fatality.
Read More →
Boating Collision on Lake Lanier, GA
Two recreational boats collided on Lake Lanier in Georgia. Boat 1 had seven occupants and three additional people on two tubes behind.
Read More →
Utilizing Data to Analyze Capsized Boat
On a lake in Indiana, a boat operator was driving a recreational motorboat with ten passengers aboard.
View AllView Less
back to case studies
Find the ideal expert today.