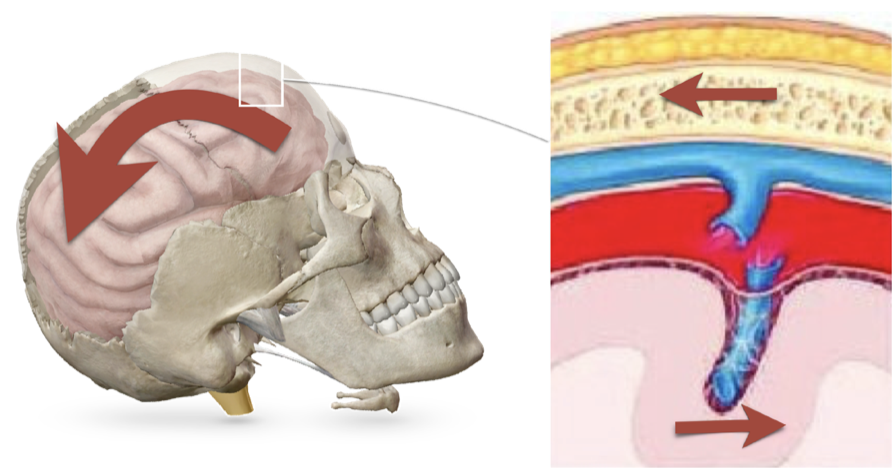 The “Shaken Baby Syndrome” (SBS) is a form of non-accidental brain injury in infants and has traditionally been thought to occur during violent shaking in the absence of head contact. The term “Shaken Baby Syndrome” entered the vocabulary of most Americans in the 1970s following the publication of two papers:

Dr. Guthkelch wrote his paper with the intention of solving a medical mystery: he noted that a number of children would show up to his hospital with bleeding on the surface of their brain (known as subdural hematomas) without any signs of external trauma (broken bones, bruising, etc.) typical of abuse. He made the simple observation that in Northern England parents would occasionally punish their children by shaking them. Dr. Guthkelch hypothesized that these shaking events caused the brain to rotate within the skull, causing bleeding.

A couple of years after Dr. Guthkelch’s paper, Dr. Caffey published his paper, coining the phrase “whiplash shaken infant syndrome.” Dr. Caffey theorized that a triad of symptoms, when present together, were indicative of a shaking event. Dr. Caffey based this theory largely on a Newsweek story about a nanny who had harmed 15 children and described aggressively shaking the babies. These symptoms, which were detectable on x-rays, are:

While these papers provided an emerging body of literature for doctors to reference when presented with infant head injuries, both Dr. Guthkelch and Dr. Caffey were merely speculating regarding the causation of these injuries—neither of them presented any scientific evidence to support their theories. Despite the lack of objective evidence surrounding the causation of these injuries, the momentum generated by these two papers gave medical doctors justification to use “the triad” as a diagnostic tool for detecting cases of infant abuse. While good intentioned, the panic generated by these papers has resulted in many false accusations of infant abuse, necessitating a true scientific inquiry into the etiology of these injuries.

The Etiology of “The Triad”

Appropriate characterization of injury patterns and the associated biomechanical mechanism is essential in determining the validity of a caretaker’s story regarding infant injury. All data that can assist medical professionals in understanding the mechanism of pediatric injury is critical when deciding on suspected abuse. Biomechanical engineering helps fill this gap between testimony, injury, and physics.

As described above, “the triad” consists of retinal hemorrhaging, subdural hemorrhaging, and encephalopathy. It has been repeatably demonstrated in the biomechanical literature that these injuries occur traumatically as a result of excessive levels of rotational head acceleration. In the case of suspected SBS, this refers to the head rotating back and forth on the neck between flexion and extension, i.e., vigorous nodding of the head up and down.  Rotational, or angular acceleration of the head, can be imparted during direct, eccentric impact or rapid movement of the torso while the head's inertia causes it to lag behind (inertial). During rotational acceleration of the skull, shearing strain will develop within the contents of the cranium. This shearing strain can cause relative motion of the brain with respect to the dura, which can overwhelm the strength of the vasculature and result in rupture and consequent bleeding (Figure 1).

Thus, when an infant is presented with retinal hemorrhaging, subdural hemorrhaging, and encephalopathy, the biomechanical engineering literature is consistent with a scenario in which the infant was exposed to excessive rotational head acceleration. Relying on the precedence set over the past 40 years, forensic pathologists have often concluded then that the cause of these injuries must be abusive shaking. However, this conclusion oftentimes conflicts with the caretaker’s description of an accidental event, such as a fall from a short height. In these cases, a biomechanical comparison of the two stories must be conducted.

Here at Explico, we utilize a validated computer program called MADYMO to investigate various scenarios and determine the likelihood that a given set of conditions produced an injury. Videos of a simulated infant shaking event and an infant fall-from-height are depicted below. While it might make intuitive sense that shaking can cause high levels of rotational acceleration, these analyses reveal that the levels of rotational head acceleration without impact are relatively low in comparison to the rotational head acceleration experienced during direct head impact, even when occurring from short height falls.

As depicted in the videos, while shaking does result in some rotational head acceleration, the magnitude of acceleration experienced during a shaking event was much lower than that experienced during a direct head impact resulting from a fall from a short height. Furthermore, the direct head impact event resulted in magnitudes of rotational acceleration that exceeded published tolerances of subdural bleeding while the shaking event did not. This is consistent with published biomechanical literature concluding that external head contact is necessary to cause the triad of closed head injuries typically associated with SBS.

As depicted in the video above, shaking events produce high levels of neck flexion/extension. Recently, Explico published an abstract investigating the relative risk of neck and head injury during inertial loading events (no head impact). It was concluded that in a shaking event, the neck is at the greatest risk for injury. While head injuries may occur at high levels of inertial loading, they are generally accompanied by an injury to the neck. We concluded that the traditional triad of symptoms associated with infant shaking should be revised to include the presence of neck injury, and medical professionals should strive to determine the presence of any neck injury in cases involving suspected shaking.

Despite the growing body of evidence suggesting a revision of the current Shaken Baby Syndrome diagnosis, courts still utilize the outdated “triad” to convict parents/caretakers of infant abuse. In these cases, a thorough biomechanical analysis should be performed by a qualified expert to determine if there is a relationship between the documented injuries and the alleged abusive action.

Explico has several of these experts on staff, and you can contact them here.

(1) Guthkelch, “Infantile Subdural Haematoma and Its Relationship to Whiplash Injuries.”

Read More →
Simulating Occupant Dynamics
Rather than performing real-life testing to address potentially meaningful case-specific parameters, which can be challenging and expensive, computational occupant dynamics simulations are a valuable, accurate, and effective addition to a biomechanical analysis.
Read More →
Biomechanical Engineering & Injury Investigation
Here’s a quick primer on forensic biomechanics, biomechanical engineering, and how to understand its real-world applications.
View AllView Less
View All
back to blog posts