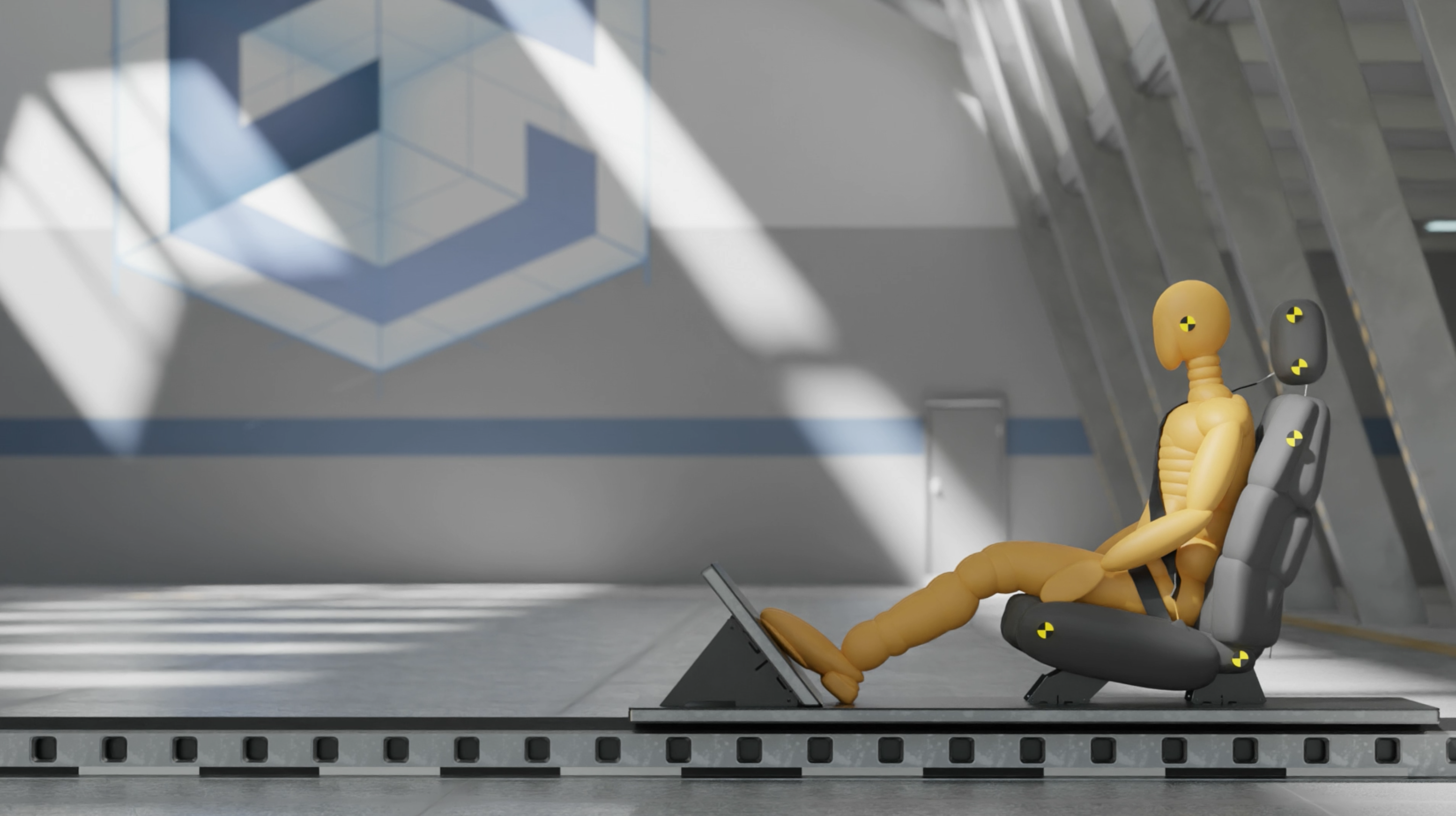 We’ve all seen videos of vehicle crash testing – a car hits a rigid barrier; a seat is accelerated forward on a track; a car is T-boned by a moving barrier. The crash test dummies in these tests are equipped with devices that measure the forces and movement of the body and have been an integral part in designing safety devices and understanding occupant dynamics. During real-world collisions, there can be additional variables at play, such as an occupant’s height, weight, and their position and posture in the seat. In some cases, understanding the influence of these additional variables can help in narrowing the range of potential forces and motions experienced by the occupant.

Rather than performing real-life testing to address potentially meaningful case-specific parameters, which can be challenging and expensive, computational occupant dynamics simulations are a valuable, accurate, and effective addition to a biomechanical analysis.

WHAT ARE COMPUTATIONAL SIMULATIONS?

Crash simulations began in the automotive industry due to the need for fast and efficient methods for developing vehicles that met criteria for crashworthiness. Prior to computational crash simulations, the industry was limited to physical testing, which is destructive, expensive, and time consuming. Not only did the implementation of simulations enable quicker and cheaper testing to achieve crashworthiness, it also allowed automotive engineers to develop more questions, solve more problems, and innovate without the need to run full-scale tests.

Computational simulations have been shown to effectively calculate an occupant’s dynamics during a vehicle collision. Occupant dynamics can be broken down into the forces acting on an object and the motion of that object during an event. Understanding these dynamics are key for determining whether the forces and motions experienced during an event are consistent with a specific mechanism of injury. This makes simulations an indispensable tool in the field of accident reconstruction and injury biomechanics.

For example, let’s say the claim is that a vehicle collision generated the biomechanical environment associated with a traumatic intervertebral disc herniation. By using computational simulations with inputs specific to the subject incident, Explico’s biomechanical engineers can determine whether the occupant’s dynamics during the collision are consistent with the published, peer-reviewed, and widely accepted biomechanical mechanism of a disc herniation. Simulations can demonstrate the nuanced occupant dynamics of any given scenario and reliably report kinetic data from the collision to inform this injury biomechanics analysis. This analysis can then inform legal proceedings and be a vital tool in determining if the forces generated during the subject incident are consistent with those associated with the mechanism of injury.

Furthermore, in situations where the occupant dynamics are very complex, like a vehicle rollover, simulations offer a method – grounded in the laws of physics – to calculate and visualize the occupant’s interactions with the interior of the vehicle. This feature of occupant dynamics simulations means that an engineer can incorporate the complex dynamics of a collision reconstruction analysis with all six degrees of freedom.

As biomechanical engineering experts, we leverage the advantages of computational crash simulations and corroborate them with real-world testing to study occupant dynamics and understand how a person may have sustained an injury during a motor vehicle collision (MVC).

The advantages, then, of computational simulations are multifold.

A common question posed to biomechanical experts is whether variations in occupant position make the individual more susceptible to a specific injury. These individuals are called Out-of-Position (OOP) occupants. More often than not, changes in positioning and posture have a negligible influence on occupant dyanmics during lower speed impacts. Regardless the ability of computational simulations to easily account for such variation provides a quantitative foundation for a biomechanical engineering opinion based on well established theory. Pulling from the previous example, when studying the kinetics of the spine, a biomechanics expert may hypothesize that changes in posture will have a negligible affect on axial loading in the spine in a low-speed rear-end collision. However, this engineer can craft a matrix of viable scenarios (head turned to the side, seatback further reclined, occupant leaned to the side, etc) to test in the simulation, and provide quantitative support for a lack of sensitivity in such a case.

Another common questions that biomechanical engineers are faced with is whether or not the use or presence of a certain type of restraint or safety device, i.e., airbags, would have made a meaningful difference in the outcome of a crash. Computational simulations, such as MADYMO, enable the biomechanical engineer to perform simulations of the subject incident and validate the results based on the actual outcome of the real-world collision. Once validated, the restraint status of the virtual occupants along with the presence of various safety features, such as airbags, can be toggled. This “A to B” comparison can provide valuable insight into the specific influence of such devices in a real-world collision, and whether or not they would have had a meaningful influence on the injuries sustained by the occupants. Explico’s computational simulations have been built to account for intrusion in the occupant compartment space and other case-specific variables.

There are two common crash simulation strategies: finite element methods (FEM) and multi-body dynamics (MBD). Both have been used to create validated models for studying occupant dynamics and have been published, peer-reviewed, and widely accepted by the scientific community. FEM is used to calculate physical parameters such as deformation, stress, and strain. MBD simulations have been proven to accurately solve for various parameters such as acceleration, velocity, and structural loading.

The same companies that make the real-world crash test dummies have developed corresponding computational models that are designed and rigorously tested to match the specific physical testing data of the real-life device. Academic, government, and private institutions have also contributed in developing high-fidelity FE human body models for automotive crash simulations. Simcenter Madymo provides a database of validated, multi-body crash test dummies and finite element human body models, which are used in producing occupant dynamics simulations at Explico Engineering. All of these models have been validated to accurately determine the kinematics of an occupant and to calculate the forces on that occupant during a simulated collision.

In the field of accident reconstruction and injury biomechanics, occupant dynamics simulations are indispensable. This tool has enabled engineers to evaluate the complex interactions between an occupant with their environment all without the expense and complex preparation of a physical test. This method determines the nuanced occupant dynamics of any given scenario and reliably reports kinetic data from the collision to inform an injury biomechanics analysis.

By using computational simulations, we are equipped with a robust and accurate understanding of the occupant kinematics during a vehicle collision. With this, we can supplement well-known documentations of occupant dynamics and compare those findings against known thresholds and mechanisms for injury.

If you have a case that could benefit from a computational case-specific occupant dynamics simulation or where you find yourself asking about “what if?” scenarios, check out Explico’s biomechanical engineering professionals and contact us today.

Read More →
The Science of Skull Fracture
Everyone has seen dramatized television shows where the crime scene investigation team matches the skull fracture pattern to the murder weapon and cracks the case.
Read More →
A Biomechanical Engineering Insight into Shaken Baby Syndrome
Advances in injury biomechanics have granted new insights into shaken baby syndrome, a form of non-accidental brain injury in infants. Here’s what we know.
Read More →
Biomechanical Engineering & Injury Investigation
Here’s a quick primer on forensic biomechanics, biomechanical engineering, and how to understand its real-world applications.
View AllView Less
View All
back to blog posts