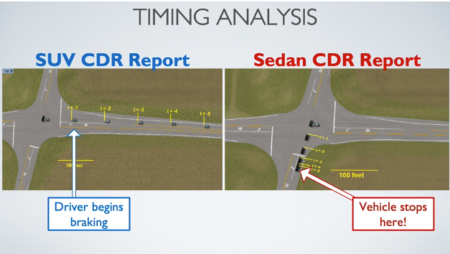 A small SUV and a sedan collided at an intersection along a rural highway at night. The SUV was  being operated westbound along a roadway with no traffic control signal. The sedan was  crossing the roadway from the south and had a stop sign. EDR (black box) records were  available for both vehicles. The collision resulted in a fatality for the passenger of the sedan.

Explico was retained to perform a reconstruction of the incident including analysis of the EDR  records as well as vehicle and site inspections. Explico also utilized the survey data taken by  police on the night of the incident to reconstruct the collision. Explico analyzed the data in  each EDR record, and was able to assess whether or not speed was a factor in the collision,  whether or not the vehicles complied with the traffic control devices at the intersection, and  whether or not the drivers of the vehicles reacted in a reasonable manner to the impending  collision. A Virtual Crash simulation was also conducted, which produced post-collision results  that were consistent with the measured roadway physical evidence and vehicle rest positions,  as well as with the pre-crash data imaged from the two vehicles’ EDRs.

Read More →
Occupant Forces During a Sideswipe with a Tractor-Trailer
A tractor-trailer changed lanes into a merging passenger vehicle resulting in a sideswipe type of collision.
Read More →
Comparing Forces on an Occupant From Different Motor Vehicle Collisions
An individual was involved in a relatively high-speed frontal collision two years prior to being rear-ended in a relatively low-speed collis
Read More →
Residential Rollover Investigation
A driver of an SUV, which rolled over on a residential street, claimed that she was traveling at the 25-mph speed limit.
Read More →
Using Infotainment Data for an Arson Investigation
An individual who was suspected of arson claimed that he had not been in the vicinity of the fire site.
Read More →
Seat Belt Misuse
The driver of a vehicle claimed that he was wearing his seat belt at the time of a collision.
View AllView Less
back to case studies
Find the ideal expert today.